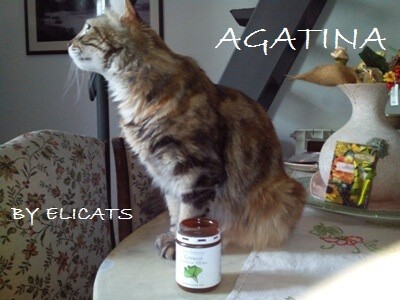 GINKGO BILOBA FOR CATS AND DOGS. A Chinese native medicinal plant, used for decades for its therapeutic effects.

Ginkgo biloba contains terpenes, Ginkgolide B, flavonoids which possess the ability to disrupt mast cell function, being able to inhibit histamine release, useful in case of allergies, cardiovascular disorders, cardiopathies and even in neoplasms. Besides Ginkgo biloba counteracts oxidative stress thanks to its flavonoids which are also provided with anti-inflammatory properties.

GINKGO BILOBA’S  THOUSAND AND ONE

THERAPEUTIC VIRTUES FOR CATS AND DOGS

Antiallergic action and in the treatment of feline asthma

Thanks to the ginkgolides which contrast PAF-induced bronchoconstriction. PAF stands for platelet-activating factor. PAF is a powerful platelet-aggregating factor, it is involved in various pro-inflammatory processes, in the formation of thrombi, in the impermeability of capillaries and in allergic asthma.

Ginkgo slows cortisol release and can help control Cushing’s disease in dogs. The ginkgolides inhibit the release of cortisol in response to stress

Ginkgo biloba improves all cognitive disorders related to old age, it allows to adjust brain consumption of glucose and increases blood flow to the brain, it has neuroprotective effect.

Action on the heart, circulatory system

Ginkgo possesses vasodilator activity on the arteries, increases venous tone. Ginkgo is a plant of proven efficacy in venous insufficiency thanks to its flebotropic action, it is used in cases of varices, thrombophlebitides, hemorrhoids and ischemias.

Ginkgo counteracts retinal damage, useful in case of sight problems associated with glaucoma. It improves capillary circulation of the eye.

Side effects and interactions

Rare side effects of moderate intensity, It should however be used under strict medical control in cats and dogs who are taking anticoagulant medication and platelet antiaggregants. Do not administer before surgical interventions.

Very high doses may cause gastrointestinal distress such as diarrhea, nausea and vomit.

THE CONTENT ON THIS WEBSITE IS TO BE USED FOR INFORMATIONAL PURPOSES ONLY. YOU ACKNOWLEDGE THAT THE CONTENT IS IN NO CASE TO BE USED AS A SUBSTITUTE FOR PROFESSIONAL MEDICAL ADVICE OR ADVICE FROM VETERINARIANS, NOR IS IT INTENDED TO BE RELIED UPON BY ANY PERSON OR ENTITY FOR PURPOSES OF MEDICAL DIAGNOSIS OR TREATMENT . IN NO CASE CAN BE USED AS A PRESCRIPTION OF A TREATMENT OR REPLACE A SPECIALIST EXAMINATION OR THE DIRECT RELATIONSHIP WITH YOUR VETERINARIAN/DOCTOR