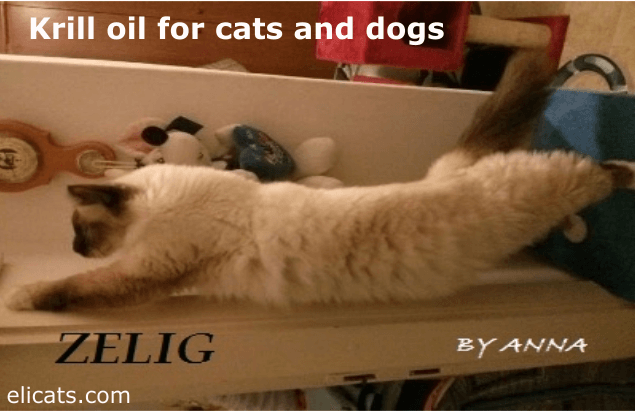 Krill oil for cats and dogs. Krill oil is obtained from a small shrimp; Krill are tiny crustaceans that form the largest existing marine biomass. They are known by their scientific name: Euphausia superba.

The advantages of the Krill oil compared to omega-3 fatty acids derived from salmon, sardines, etc

Phospholipids are fatty acids that are totally absorbed by the intestinal cell membranes, they allow reducing dosage without losing omega-3 in terms of absorption

The Krill oil comes from the clear waters and sea cold and is made from a small crustacean called Euphausia Superba. And ‘the most abundant crustacean in the world and the largest biomass on earth. It is estimated that the mass of krill amount to several thousand million tons. Every year they are captured only about 0.03 percent.
This quota was established by the International Commission for the Conservation of the Antarctic (CCAMLR) which ensures ecological conservation of species of krill on earth.
The Krill Oil provides two types of fatty acids of which the dog has a particular need: Omega-3 and Omega 6. The health benefits of Omega-3 fatty acids are based on the effects of two fatty acids, eicosapentaenoic acid (EPA ) and aso acid that their water supply is lacking, also guaranteeing the protection from ultraviolet radiation.

THE CONTENT ON THIS WEBSITE IS TO BE USED FOR INFORMATIONAL PURPOSES ONLY. YOU ACKNOWLEDGE THAT THE CONTENT IS IN NO CASE TO BE USED AS A SUBSTITUTE FOR PROFESSIONAL MEDICAL ADVICE OR ADVICE FROM VETERINARIANS, NOR IS IT INTENDED TO BE RELIED UPON BY ANY PERSON OR ENTITY FOR PURPOSES OF MEDICAL DIAGNOSIS OR TREATMENT . IN NO CASE CAN BE USED AS A PRESCRIPTION OF A TREATMENT OR REPLACE A SPECIALIST EXAMINATION OR THE DIRECT RELATIONSHIP WITH YOUR VETERINARIAN/DOCTOR